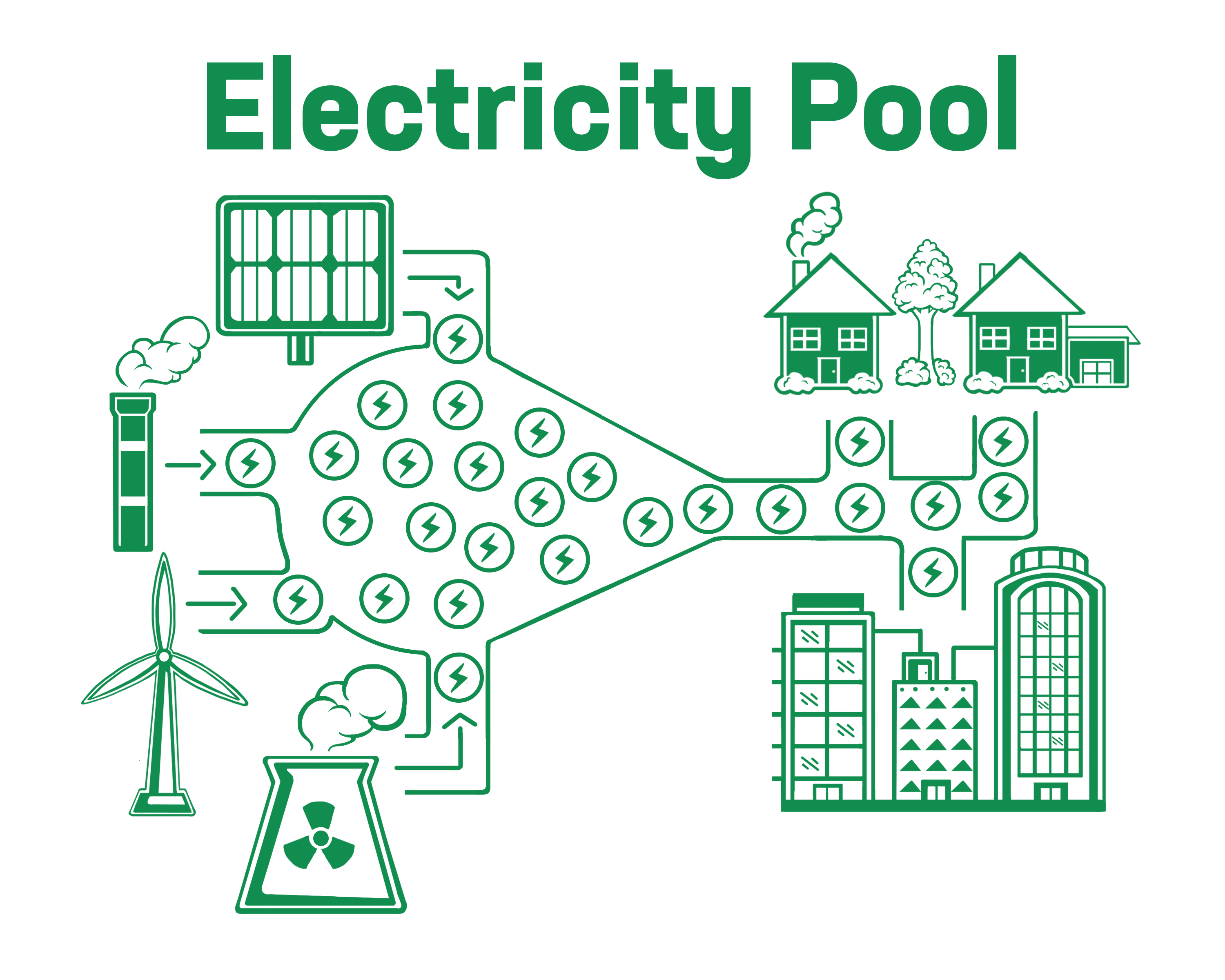 The grid acts as a large pool. Generation sources like solar, wind, nuclear, natural gas, etc produce electrons that flow into the pool. All the sources mix together in the pool and the electrons are distributed to customers as electricity. Since everything is mixed together in the pool, it is impossible to differentiate which electrons come from where. RECs ensure that a customer can claim the renewable attributes of the electricity they are receiving from the grid. Our electric grid was restructured in the 1990’s so that electric utilities only distribute electricity, they do not own the generation. This means that we can only account for electricity emissions when they arrive to the end user, such as your house in the image above.

Why are RECs important in Massachusetts?

Massachusetts is one of the states that has committed to a clean energy plan of being 80% carbon-free by 2050, in spite of the country’s intention of pulling out of the Paris Agreement. In order to achieve the state’s 2050 goal more local renewable energy projects must be created. The Renewable Energy Portfolio Standard (RPS) was created for this purpose. It began in 2003 and required that 1% of a utility’s energy portfolio comes from renewable sources. Every year that percentage goes up by 1%. The RPS is currently at 13% (as of 2018).

UPDATE: Following new legislation, the RPS will begin increasing by 2% in 2020 for 10 years. After 10 years it will drop back down to 1% in 2030. This will bring the percentage of renewable energy bought by MA and generated in New England to 55% by 2050.

Currently the RPS only applies to Investor Owned Utilities (IOUs). In MA, those are Eversource and National Grid. IOUs account for roughly 85% of the states energy. However there are also 41 Municipal Utilities (munis) that serve all or part of 48 towns in the state. They make up the other roughly 15% and they don’t have any renewable energy requirements. Some munis purchase RECs and have renewable sources while others don’t or do very little. There is no management or compliance system for them.

Utilities are accountable for delivering the minimum amount of renewable electricity to their customers. They purchase RECs in order to comply with the RPS. For renewable projects in MA, RECs are essential for the viability of the project. In MA, it is more expensive to develop renewable projects than in other states, therefore renewable projects cannot generate enough revenue for private developers to finance the project solely from selling electricity (See Green Energy Consumer Alliance Chart to the below). Private developers rely on REC sales to the utilities in order to make up the difference. REC sales ensure that projects are financially viable and future renewable facilities get financed. As the RPS and the need for RECs increases, the idea is that the increased demand will require that new renewable energy facilities come online. 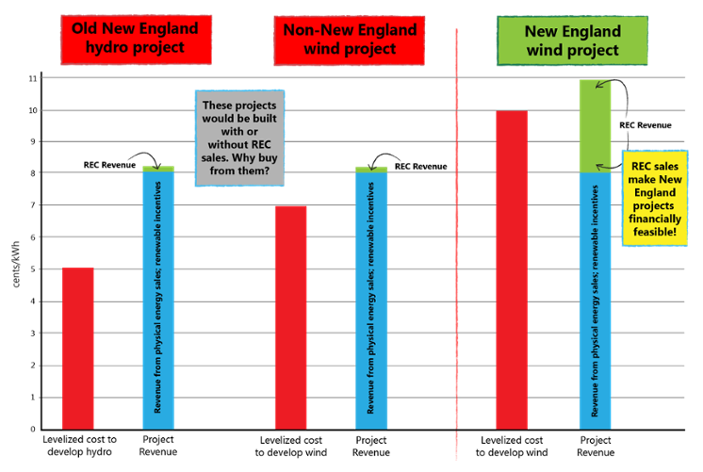 Purchasing RECs from other states doesn’t have an effect on the MA REC market. Since, utilities will often do the bare minimum in order to comply with the RPS it is important for individuals and commercial entities to also purchase RECs. This will force utilities to fund more renewable sources in order to comply. At the current pace MA will not reach its goal of being at least 80% carbon-free by 2050 if the state solely relies on compliance to the RPS.

Are there different types of RECs?

RECs are distributed into different classes and types ( Class I, Class II, SRECs, etc). Class I RECs are generated by renewable energy facilities in New England that began operation after 1997 and create electricity from solar photovoltaic (PV), solar thermal, wind, low impact hydro, aerobic digester gas, geothermal, etc. They are the best types of RECs because they do the most toward supporting renewables and reaching the state's energy goals.

Class II RECs are generated by eligible renewable energy resources that began operation prior to 1998 and include waste energy.

SRECs are RECs generated by solar PV resources. SRECs were created as a 650 MW carve-out. The carve-out mandated that a portion of all Class I RECs come from solar PV. Following regulation in 2014, SREC II was created for solar PV resources that began operation after April 2014 and placed an aggregate capacity cap of 1,600 MW on PV generation. SRECs will continue until 2023 at which point they would transition into Class I RECs. SREC II is the current program being used for solar PV.

However, a new program called (Solar Massachusetts Renewable Target) SMART was created in 2017. The SMART program changes the incentive structure for solar PV resources by creating a declining block incentive program for PV resources with a cap of 1,600 MW similar to the SREC II carve-out. As of third-quarter 2018 it has yet to go into effect.